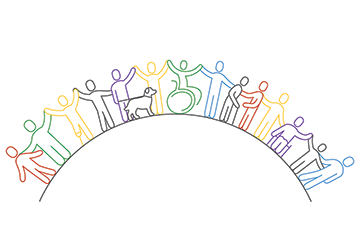 Although people with disabilities make up the largest minority group in the U.S., they have been largely left out of discussions of diversity, equity and inclusion (DE&I) in clinical trials, making them one of the most underrepresented populations in research, say two researchers who recommend sites and sponsors pay more attention to their unique needs.

One in four adults in the U.S. are living with some kind of disability — physical, mental, cognitive or developmental — but unnecessarily exclusive eligibility criteria and lack of accommodations are blocking their access to trials, according to Barbara Bierer, faculty director, and Willyanne DeCormier Plosky, program manager, of Brigham and Women’s Hospital’s Multi-Regional Clinical Trials Center, who co-authored a recent study on the topic.

“While there has been significant attention, particularly over the last few years, to DE&I in clinical trials, this attention has tended to focus more on sex, race and ethnicity, and less so on underrepresentation among other groups,” Bierer and DeCormier Plosky told CenterWatch Weekly.

The analysis, done by researchers at Harvard University, Brigham and Women’s Hospital, Columbia University, the University of Utah and Mass General Brigham, looked at 97 phase 3 trial protocols across the therapeutic areas of dementia, depression, diabetes and lung cancer, gauging the exclusivity of their eligibility criteria and permittance/provision of supportive accommodations.

A large majority of the protocols (85 percent) afforded investigators broad discretion in determining eligibility, often using language that was so nonspecific or broad that many prospective participants with disabilities were made ineligible, according to the researchers. And a mere 18 percent explicitly allowed forms of support, such as supported decision-making and assistive devices, that could make it possible for disabled individuals to take part in a trial.

Dementia trials appeared the most attentive to disabled participants by far, with 64 percent of them clearly allowing supportive measures. But the nature of these trials, studying the effects of a debilitating disease, makes this necessary in many cases.

The other therapeutic areas were far more exclusive: only 12 percent of diabetes and 16 percent of lung cancer protocols explicitly permitted supports, while none of the depression protocols had language allowing them.

Among the protocols that allowed supportive elements, examples include trial staff reading questions to the participant, hearing aids, assistance of an individual trained to inject the investigational drug, walkers or canes, and “assistance of a sighted individual.” But the protocols generally didn’t explain whether the accommodations listed were examples or a complete list of accommodations.

A lack of clear wording on allowed supports for participation isn’t necessarily an indicator that disabled patients weren’t considered or supported in taking part. The researchers noted that while these protocols might have allowed or provided for supportive measures without explicitly stating so in their eligibility criteria, they “assumed that explicit acknowledgement can reasonably be considered an indicator of the intention to design the study for accessibility.”

Overall, the greatest rates of exclusions that may have impacted patients with disabilities were seen in “other chronic conditions,” where 93 percent of protocols had related exclusion criteria, followed by psychiatric (68 percent), substance use (62 percent), HIV or hepatitis (53 percent) and cognitive or intellectual (42 percent). The lowest number of exclusions were related to visual (34 percent), hearing (10 percent), mobility (9 percent), long-term care (6 percent) and speech/communication (3 percent).

Justification for these disability-related exclusions was often nonexistent, the researchers found, and across all categories reasoning was provided only one-fourth of the time. Cognitive-related exclusions had justifications 46 percent of the time, psychiatric 36 percent, mobility 11 percent and substance use just 7 percent. By contrast, hearing exclusions had justifications 90 percent of the time and speech/communication 67 percent, though these exclusions were quite uncommon. No instances of HIV or hepatitis and long-term care setting-related eligibility criteria were accompanied by justifications. Some exclusions might be obvious ones, such as those related to patient safety, but even these should be clearly explained, the researchers believe.

Bierer and DeCormier Plosky feel that eligibility criteria should be “as inclusive as possible and only as restrictive as necessary,” with all exclusions having scientific or ethical justifications behind them. Criteria should be specific and steer clear of broad, vague or open-ended phrasing that could unwittingly bar large groups from participating. For instance, an exclusion should be expressed specifically as “seizure” rather than broadly as “neurological disorder.” In addition, specific plans for allowing and providing common and custom support measures should be sufficiently detailed.

Steve Smith, president of patient advocacy for WCG, agrees that inclusion/exclusion criteria should be carefully worded with disabled participants in mind.

“This is another area of DE&I in trials that needs modernization,” Smith said. “Like the more talked about subject of ethnic and racial diversity, or age or gender, disability is an area of exclusion that is more likely to be sufficiently modernized if there are more deliberate efforts to study and measure the nature and causes of exclusion.”

“Analysis that leads to a more detailed and specific understanding would help this aim to be more specific. Such analysis could also lead to establishing standard definitions and language so that clinical trial sponsors could be more thoughtful and narrow the focus on excluding only those whose disability clearly would present a safety issue for the patient, or make the trial impossible to conduct.”

Overall, Bierer and DeCormier Plosky believe there needs to be greater effort on bringing this group and their caregivers in on study planning, review and communication, as well as greater education on working with patients with disabilities.

The healthcare and research workforces need training to identify bias against individuals with disabilities, use respectful language and interpersonal interactions, and understand the legal and professional responsibilities for inclusion of people with disabilities in clinical research, they said.

“We need to plan for inclusion and accessibility at each point of contact with participants throughout the trial, budget for modifications if necessary and implement necessary changes. Designing studies that are accessible by intention to all individuals from the outset will be beneficial to everyone.”